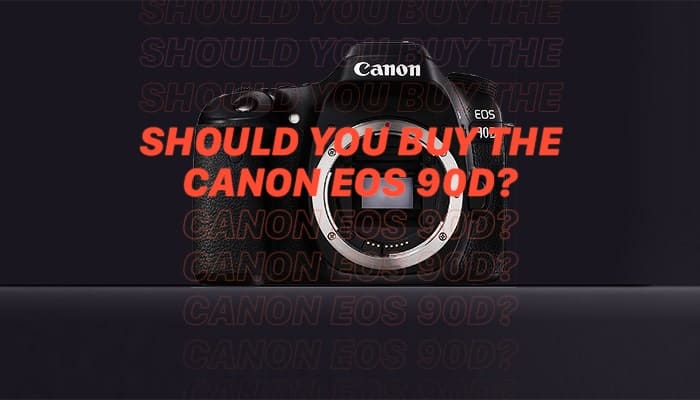 Canon users in the mid pro DSLR market have been eagerly awaiting replacements for both the Canon EOS 80D and the Canon EOS 7D Mark ii. It’s believed the latter will not be replaced and instead we will just get the Canon EOS 90D which will take the place of the mid pro dslr market segment.

This was always a possibility albeit very unlikely. An APS-C Mirrorless camera would be a great step for Canon. But we already have the Canon EOS M5 which is APS-C, although this only uses the EF-M mount.

The Canon EOS 90D specs is confirmed as a DSLR and probably the last of the two digit D range from Canon, if they do indeed transition their camera ranges to mirrorless.

In 2020 we are expecting multiple new mirrorless bodies, a 90D equivalent could be among them.

The Canon EOS 90D price is confirmed, check my Amazon affiliate link to take you to the latest pricing. However as of this article the Canon EOS 90D Price strategy is exactly the same as its predecessor, so you should be looking around the 1000 USD/ GBP range. Whether this is too much considering it’s not mirrorless is something to factor in. Which I’ll go into more detail next.

End of the EF Mount

In 2018 Canon joined the mirrorless market with the Canon EOS R and the announcement of the superior RF mount.

Canon have subsequently released the Canon EOS RP and devoted 2019 to the development of the RF mount, announcing six lenses this year to add to the five lenses from the RF mount launch.

The general consensus is that mirrorless will eventually replace DSLRs.

While Canon have stated they will continue to develop the EF lineup and DLSR cameras, the future is inevitably with the RF mount, as it was with the EF mount when it replaced the FD mount for Canons SLR cameras.

So the fact that Canon may be releasing a mid pro DSLR with the EF mount, shows Canon are still invested in the EF mount and DSLR market and recognise the need to accommodate users who are not ready to move to mirrorless.

Do the Canon EOS 90D Specs make it worth buying?

If you are already invested in the EF mount, the Canon EOS 90D specs would make this camera a great addition to your camera gear.

If you are not invested in any camera system, have either no EF glass or not a huge investment with maybe one or two lenses, then I would strongly advise caution here.

The Canon EOS 90D will likely be the last mid pro DSLR. And I would hesitate to invest in a mount, that while more than capable of producing stellar work and will continue to do so for years to come, will eventually be deemed obsolete.

But though I use the word obsolete, which may be too strong, what I can safely say is that, as it is today with many older cameras, the Canon EOS 90D specs show that it will continue to be used by professionals for work, years and years after even after the newer EOS R equivalent upgrades have come out.

Check out my YouTube channel to see the Canon EOS 80D in action! And if this article was of value to you, more reviews here!

Canon EOS 90D on Amazon US

For the gear I use alongside my Canon cameras check out my kit.com profile.