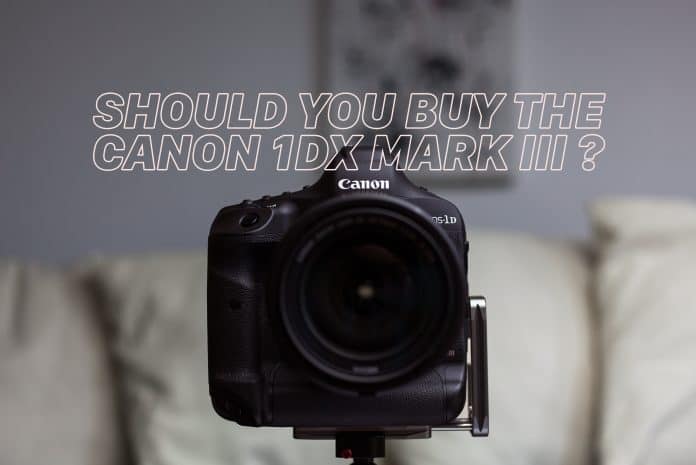 The Canon EOS 1DX Mark III has been announced with confirmed specs. Listed here are some selected specs from a comprehensive update to the 1D line that may help you decide if you should you buy the Canon 1DX Mark III:

Back to the Article…

Check out my Canon 1DX Mark III rumours blog article for the latest news and announcements.

What about the Canon 1DX Mark II?

But there are a few specs I wish Canon could have included; tech that was possible to include at the time of production, but was intentionally omitted.

Amongst the specs Canon decided to leave out include:

All those specs are technology that was available at the time of development; specs that would be available on rival camera brands.

Most likely the main reason Canon omitted them was to not cannibalize its Cinema range cameras. Or maybe to leave an element of built in obsolescence.

Either way Canon intentionally reduced the capabilities of this camera from what it could achieve with the tech of that time.

Imagine if all those specs and more were available on the Canon 1DX Mark II now, it would still be better than most cameras being released this year. But then it would be much more difficult to justify upgrading. And this isn’t a good business model for Canon, of course they want us to continue upgrading to newer camera bodies.

End of the EF Mount

In 2018 Canon joined the mirrorless market with the Canon EOS R and the announcement of the superior RF mount.

Canon have subsequently released the Canon EOS RP and devoted 2019 to the development of the RF mount, announcing six lenses this year to add to the five lenses from the RF mount launch.

The general consensus is that mirrorless will eventually replace DSLRs.

While Canon have stated they will continue to develop the EF lineup and DLSR cameras, the future is inevitably with the RF mount, as it was with the EF mount when it replaced the FD mount for Canons SLR cameras.

We have yet to see what we would regard as Canon mirrorless Pro body. But rumors are that the first Pro body from Canon will be a high mega pixel count camera, a mirrorless equivalent to the Canon EOS 5Dsr. This will probably be announced in Q3/4 2019 to be released in either Q4 2019 or Q1 2020.

Canon currently have more lenses in their RF lineup waiting eagerly for a Pro body and mirrorless bodies waiting for cheaper and more suitable RF lenses.

So if you want to buy a 1D camera, a sports orientated body, with Canon’s top specs in a mirrorless equivalent then you will probably have to wait till 2020 just for rumors to start. It will probably be 2021 at the earliest for even an announcement of a mirrorless 1D. This time frame should definitely influence you should you buy the Canon 1DX Mark III

Why should you buy the 1DX Mark III?

Once that Canon EOS 1DR does drop, then the decision will be much easier as the Canon EOS 1DX Mark III will likely be a few years old by then. Canon will almost definitely not release a mirrorless 1D so soon after the Canon 1DX Mark III, but don’t hold me to that!

If you are looking to buy into the 1D setup now and you are already invested in EF glass, then with the Canon EOS 1D Mark III around the corner, you would not go wrong waiting; or alternatively purchasing the current Canon 1DX Mark II, as there may not be enough of an upgrade in specs to warrant what will likely be a £2000 plus difference.

If you are not invested in any camera system, have either no EF glass or not a huge investment with maybe one or two lenses, then I would strongly advise caution here, in considering should you buy the Canon 1DX mark III.

A good question is should you buy the Canon 1DX Mark III when it will likely be the last of its kind. I would also hesitate to invest in a mount, that while more than capable of producing stellar work and will continue to do so for years to come, will eventually be deemed obsolete.

But though I use the word obsolete, which may be too strong, what I can safely say is that, as it is today with older cameras, the Canon EOS 1DX Mark II and III will continue to be used by professionals for work years and years after even the newer upgrades have come out.

If you are interested in getting the Canon 1DX Mark II then please use my affiliate link below. There is no difference to the price you pay, I will just get a small commission, that goes toward the costs of running this website.

For the gear I use alongside my Canon 1DX Mark II check out my kit.com profile

Justin Punio - August 31, 2019 0
I have had my eye on getting a portable light that would double up as a good studio light. Surprisingly I could...

Justin Punio - August 9, 2019 0
As a digital content creator producing photos, I am also creating design and video content too. The monitor I work with...

Justin Punio - May 5, 2019 0
In all my years as a professional photographer I have never given much thought to the need of an L-bracket, until...