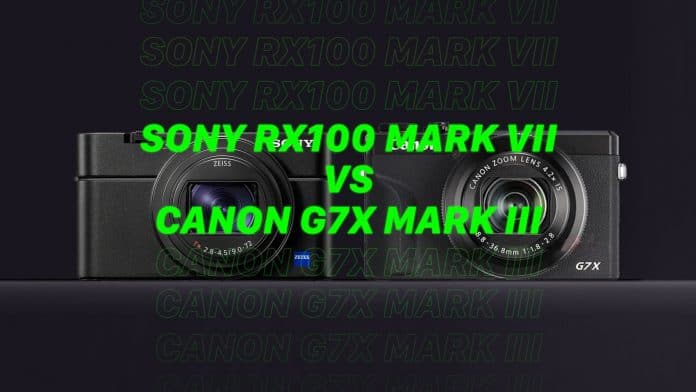 The Sony RX100 Mark VII vs every other point and shoot is always popular! And the specs are something to behold. In fact Sony have been breathing down Canon’s neck in the camera sector for a while now, with Canon seemingly always playing catch up in the specs department. Does Canon’s perceived lack of innovation let down their newest point and shoot against the current king of compacts?

Canon have now released their new compact point and shoot, the Canon Powershot G7X Mark III but how do the two compare. Can Canon reclaim its crown? I am an owner of the magnificent G7X Mark II and that is a top point and shoot so I am as eager to know too.

The Canon G7X Mark III is packed full with features. But how does it stack up against its rivals, specifically the Sony RX100 Mark VII specs?

Canon have not increased pixel count and so match the Sony RX100 VII, sticking with a 1 inch stack type CMOS sensor.

Canon however have increased the focal length from 24-100mm to 24-120mm. The Sony RX100 Mark VII specs have a little more reach though, at 24-200mm, but this was at a trade off for a smaller aperture.

The Canon G7X Mark III has an aperture of F1.8-2.8, compared to Sony’s F2.8-4.5. This could be important for those wishing to use low light situations.

Sony RX100 Mark VII vs Canon G7X – Which One Should You Buy?

On paper Canon have seemingly produced a genuinely good rival to the Sony RX100 VII. But based on specs the Sony just has more packed in.

To see the predecessor, the Canon G7X Mark II in action go and check out my Youtube channel for my latest videos, as well my Instagram for all my photos. And check out my other camera gear.

Amazon Affiliate
JustinPunio.com is a participant in the Amazon Services LLC Associates Program, an affiliate advertising program designed to provide a means for sites to earn advertising fees by advertising and linking to Amazon.com
Social Media
© Justin Punio 2020