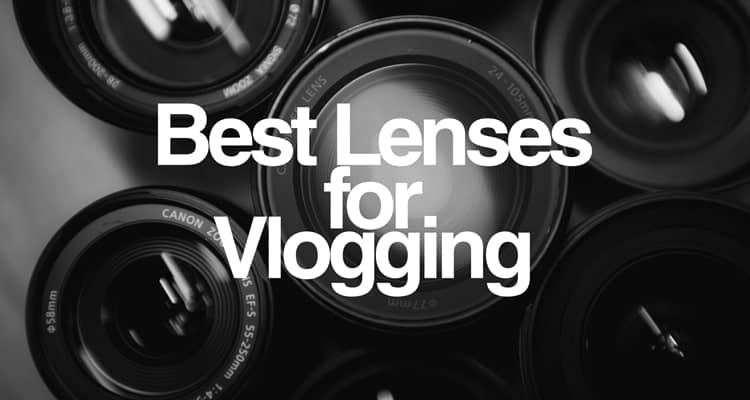 The best lenses for vlogging actually have a few important factors that you don’t want to get wrong, or you could put yourself off the vlogging experience. This article will cut through the fog and show you the right lens for your camera.

FunForLouis and Casey are the grandads of vlogging, with the former possibly the first daily vlogger ever and the later taking vlogging to the next level.

But these two vloggers don’t have just one lens in their bag and there are different types of vloggers with different budgets, so we need to go into more detail.

How to Choose a Vlogging Lens

Let’s talk about a few factors you need to consider when choosing the best vlogging lenses for you.

The first consideration is that it has to be a wide angle lens. Vlogging by nature is done hand held, so you will be holding your hand up with the camera at arms length to get yourself in shot.

The lens that isn’t wide enough will not get enough of you in frame or will require you to hold your arm at an uncomfortable reach just to get a good angle.

Primes are great lenses because they are built for one focal length and because of this usually have much better quality. But having the focal range of a zoom means opportunity for more alternative options.

If you want to cover the breadth of range of a typical zoom you with prime lenses you would probably need three lenses. Possibly a wide, mid and telephoto.

A zoom lens while losing a little quality means you have more options and you can quickly go from one end of the range to the other.

Not particularly important but incredibly handy if available in a lens is image stabilization.

Holding your arm out to vlog will not make for the most stable shot. Because your arm is out you will not be able to continuously hold it steady as you move around.

Using a Joby Gorilla pod will help reduce the amount of micro shakes that end up in the video, but , but have IS will help out even more.

You can get IBIS, which is image stabilization in the camera and IS in the lens. Or a combination of both.

There is an added cost to this so be aware.

Best Lens for Vlogging on Canon

There are four camera systems available at Canon, which at some point they will have to address. The now old school EF-S and EF lens mount, which has been replaced by the RF mount. Then there is the M original mirroress mount.

This lens was made famous by possibly the man who revolutionized vlogging, Casey Neistat.

The great thing about this lens is wide at 10mm. Because this is an EF-S lens that means this is a crop lens, so if we use the crop factor of 1.6, this translates to 16mm at its widest.

Canon’s 16mm L mount lens are incredibly expensive so it’s great to know this lens will be much kinder to your budget.

It’s not the fastest lens out there, so you will find some lacking in low light and achieving really creamy bokeh, but I don’t think that held Casey back so it shouldn’t be with you.

The first iteration was my first lens, which is usually a standard kit lens for the bigger full frame cameras like the 5D. However do remember, that EF lens will work on both full frame and APS-C lens, where APS-C will only work on crop Canon cameras.

The 24-105 is a great solid built lens and produces top quality images. I was very happy with my lens, however for me it wasn’t fast enough at F4. I opted for the Canon 24-70mm 2.8L, which is one lens I will never sell.

This is an L lens which means it is from the professional range of Canon lenses notable for the red ring near the focus ring.

The M mount is for the original mirrorless mount system from Canon. To be honest, now that we have the RF mount I think that means this camera system is doomed.

There are still great cameras like the M50, which is a great camera for getting started on YouTube, but if you want to futureproof your gear, invest in the RF mount.

That said, the 18-150mm represents a wide range of focal lengths to choose from. I would even say you could get away using just this one lens for most video needs.

This is a new RF lens which is the non-L version of the RF 24-105mm F4L. So while it may lack a little less in quality it is still a great lens for its value.

You are getting the full focal range of the L version but losing a few stops of light at the telephoto end. This basically means you are getting less light at 105mm and will have to compensate with a longer shutter speed of higher ISO.

Best Lens for Vlogging on Sony

FunForLouis is a Sony ambassador and has had access to nearly all the wide lenses on the Sony system so when he tells you he has one lens that he never leaves without, it must be good.

The Sony FE 24-240mm is not a new lens, but it is the lens Louis Cole cannot live without.

The f/3.5-6.3 means that the lens is quite light, which is perfect for vloggers on the move.

This lens also incorporates the Optical SteadyShot for top of the line image stabilization. Which means sharper images and video.

This G mount lens is from Sony’s professional range of lens and the equivalent to Canons L professional lenses lineup.

The 16-35mm is going to be the best quality lens for this popular zoom focal range. It has the perfect range between 16-35 and will be wide but without the distortion of wider focal lengths.

The 2.8 aperture means this is a super fast lens and will be great in low light and will produce great shallow depth of field images.

Best Lenses for Vlogging Round Up

I want to keep this list of the best lenses for vlogging to a small selection and not give you too many options that it overwhelms your decision making.

There are hundreds of lenses available but these particular ones I have mentioned you will find in many YouTuber’s arsenal.

Of course as you increase your budget you will find other lenses and cameras for different shooting scenarios, but these lenses will always cover you for vlogging.